Who will stop an army of the dead and the damned as they plot to take over Agea?

As the Andolorayne Empire begins it slow crumble, the enemies of the great empire make their play. Dwarves raid supply routes, Human uprisings and revolts, and still worse: Heaven and Hell collide as the fate of Agea is decided in the lands of Malundaia. A small band of adventurers struggles to unite the races against an army of demons and the undead. Will they be sucessful, or will the Demon Lord make his thrown on Agea?

The great elven empire, Andolorayne, is in decline; rebellion, politics, and over-expansion have taken its toll on the once great civilization. Now, dwarves raid supply lines and attack outposts, human uprisings draw precious resources and erode away at former conquests, and recently, there is a hint of something even more sinister.

Within these pages you will find the information pertaining to Agea, my gaming world, as well as campaign information for the level spanning epic saga, and the diary of our adventurers as they unravel a mystery shroud in secrecy, demons, and deception that could destroy their world.

The Watchtowers of Shadowgate Depths darkanglmarine 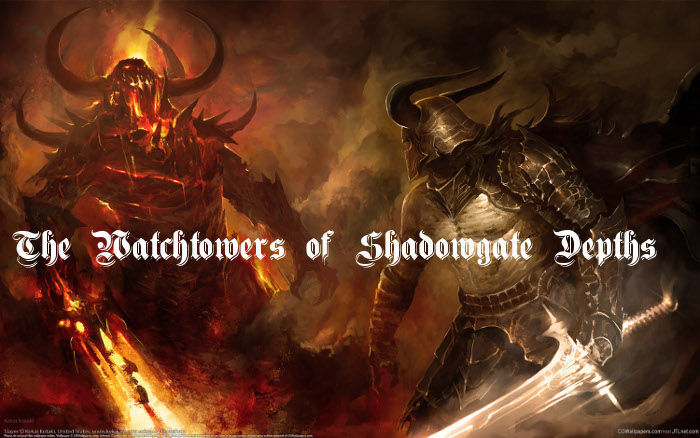 The Watchtowers of Shadowgate Depths Comments

This looks awesome, If you ever need an extra player give me a call! I literally live up the road from where you have marked the game on the map. :)

Really looking forward to the first session! I am sooo excited for character creation!

Awesome Images, This sounds awful but I like your SEX concept, I do something similar but (Player Reward Points) but there are some nice ideas there.

Titans, Wurmslayer Fortress, Crusader……? I smell something beginning to stir in the pot!

Hey! The Banner is here!

I second KVP on the need for the banner. I think you have reached the stage where it seems like a big empty space compared to colour and vibrancy of your campaign!

Hey Darkanglmarine, I see you are keeping yourself busy!!! LOL! Don’t overwork yourself!

Really, truly improved! Needs a banner image so I can add it to my favorite campaigns on my profile, and get nominated for COTM!

Nicely written, and brilliantly illustrated, I really got a sense of the whole of the Dwarven Force, with their supplementary units of engineers and elemental aides. Nicely done!

Further to my last comment, I have to say I really like the imagery on this site. The main DEMON KING picture is ACE but the background image is also really cool. I can see that you still have a lot to add to this site, but I think you have a good grasp of LORE in the first few pages of your wiki. I note the excellent background does not yet appear on every page but I presume this is a work in progress.

I was rather surprised at the amount of stuff in the Forums already, but the more the merrier. Good use of the forums is always a helpful addition to any game. I like the Mythos of Giliath, Saneth and the Tree of Life, as well as the deities springing from the fruit of Agea – Nice Mythic Stuff!

I look forward to being able to read through more at a later time and wish you all the best in your continued crafting of this site.

I'm sorry, but we no longer support this web browser. Please upgrade your browser or install Chrome or Firefox to enjoy the full functionality of this site.